No, not a character from Star Wars. The plasma that exists inside our bodies...or more specifically our blood.

For those unfamiliar, let me give you some more details. "What is Plasma in Blood? Plasma is the liquid portion of blood. About 55% of our blood is plasma, and the remaining 45% are red blood cells, white blood cells and platelets that are suspended in the plasma. Plasma is about 92% water." 1 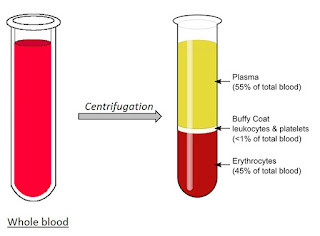 It's the part of our bodies that doesn't require a black market to sell, because there are options to sell it legally in plasma centers probably in every major and minor city in America. In fact you can make a decent amount of "not so quick cash" in your first few donations where afterwards the price does go down for what you exchange. Is it blood money? I mean in a roundabout way yes.

You go into a plasma center, you read about all the potential restrictions and the potential risks of donating. You learn why your plasma is so important and worth the money too. Plasma is used to do things that are indeed important.

"The plasma protein therapeutics industry supports volunteerism donation in all of its forms. Source plasma donation and blood donation are critically important activities that contribute to saving lives. Source plasma and recovered plasma are used to produce therapies that treat people with rare, chronic diseases and disorders such as primary immunodeficiency, hemophilia and a genetic lung disease, as well as in the treatment of trauma, burns and shock. Whole blood donations most often are used locally in hospitals for transfusions required during surgery or other medical treatment." 2

You may ask, why I'm even using a Wednesday "Work in Progress" post to talk about this topic? The answer is simple. I've started donating. In the 2 months I've been donating I've definitely come to some feelings about the process. I've wrestled with posting about it, but after sitting in a center for 3 hours yesterday only to be told I couldn't donate I just wanted to express some frustrations and positives about the entire process. In case you, or someone you know is considering this path of plasma donation.

I started donating plasma because we are in the middle of a pandemic, and I have been involved in medical studies that have helped create ebola vaccinations. I believe in medical testing on willing participants. I believe that compensation is important due to the time it takes to be involved with these procedures and vetting processes for things that have hopefully and inevitably gone on to save hundreds and even thousands of lives. Donating plasma was a way to give back if I was capable to people who are in need of medications and therapies that depend on this as a component. It would also help me generate a bit of "income". I have been attempting to hold 2 -3 jobs for the last 5 years and have been wearing myself out in the process. I thought I don't need a lot of money, but a little "extra" would help stretch the budget and allow me to live without having to ask others for help or trying to take on another minium of 10 hours of work world life. I had also considered doing overtime for the company I currently work for, but while I love my job it's very stressful at times. I just don't feel comfortable enough in my job knowledge yet to feel like adding overtime hours to my day or week. In fact that thought right no makes me anxious.

So while the thousands of people are attempting to find jobs to just keep themselves afloat during this pandemic, I didn't want to even hesitate to enter the part time job force since I do have a full time gig. I wanted those positions to go to people who really need them to keep their families from "going under" fiscally. However, I did need a plan to generate some income until some of the year's financial stressors for my family have died down somewhat.

In walks, Plasma donation. Hey, it's an option!? I swallowed my pride and went to the first plasma center in my town to see if I could and was even eligible. The first time, as many centers warn you takes quite a long time. I'd say 3-4 hours. You read through literature on the risks and the process and the potential limiting factors for people who want to donate. You watch a video on the process and basically to reinforce all the readings you just digested with your eyes and brain. Then you get your vitals checked. You get weighed, they check your blood pressure, pulse, temperature and test your blood to make sure it's in good condition for donation for the day. Then onto a physical examination and more questions and just education and assessment for eligibility. Once you pass through all these hoops, you get ushered to the donation floor and hooked up hopefully for a successful plasmapheresis procedure (where your blood is extracted, the plasma is separated and deposited for use, and the red blood cells are then returned to your body again). If everything goes well and you donate your sweet plasma successfully, you are rewarded with money deposited onto a prepaid card and you're on your way.

The subsequent visits are a bit easier. A lengthy questionnaire, the biometrics/vitals process and if all is well you donate. However, anything in that process can knock you out of service delivery for the day. Blood pressure not where it should be...retest to see if you can and if it's not better, no go. Pulse not where it should be...rest...retest and if it's not right, no go. When you are a plus sized individual this is where it becomes even more frustrating. Sadly, a standard automated blood pressure cuff rarely if ever works on me. It usually ends up failing with "too much noise" or otherwise. You may have to ask for the largest automatic cuff which is for I guess a thigh, and then sometimes it works, sometimes it doesn't because it's awkward to put on an upper arm or otherwise. Either way, I never find that the automatic cuff is a true accurate depiction of my blood pressure or pulse. I've only ever got accuracy with a manual blood pressure reading and pulse check. When they do it the old fashioned way of pumping up the little ball and reading the gauge, do I get numbers that seem correct based on my history. Same with pulse. Good old fashioned counting is the only way to get a true read for me. So at least 3 times I've been told to go home from the center that only uses the manual blood pressure cuffs and I'll admit, it's beyond frustrating to me. After numerous attempts at the one center in town who seemed more interested in a cattle call and processing (albeit faster processing of people), I decided to find a more personal, caring and personable donation center. Which I have, and one that actually will take manual blood pressure readings and pulse checks unfortunately only after two failed attempts at the automated readings meaning, you'll be there for a while waiting to see the nurse to get the correct readings to give your blood-water away.

Yesterday was the first day that I even had a slightly elevated temperature with 99.7 degrees which prevented me from donating. I didn't feel ill at all, but rules are rules. 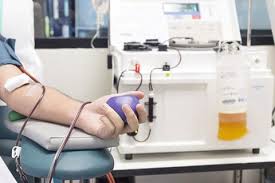 However I will say this. I've read a lot of articles about the feeling that plasmapheresis is something for those less fortunate to do because they "need the money". I've read that big pharma basically uses and exploits the less fortunate with this methodology and system. In some ways, when you sit in a plasma donation center I could see how that view develops. I do think there are a wide variety of people laying in the donation bays hooked up to the plasmapheresis machines. I would feel pretty confident saying they range from the upper middle class to the poor people just trying to stay afloat somehow. Regardless, the process is completely voluntary so to say that big pharma is exploiting people I think is a bit much. You choose to do this. There's no forcing.

But I guess you could also say the same is true for a woman or man who decides to sell sexual services, although that is illegal in most states. Where this is a legal and regulated activity. You are also only allowed to donate 2 times in seven days, so it's not an "income". You also have to choose a primary location to donate and cannot jump from one center to another during the week to rack up donation dollars. Plus they take seriously the need for your body to refresh itself during the 1 day in between donations.

I have noticed however that even though you don't know the stories of the people in the plasma center, I have to imagine we are there for one of two or both major reasons. One would be because we realize that this type of donation can truly be used for life-saving medication and treatments. In fact, a friend of mine was donating specifically for a person who needed it once, and that's where I first learned about plasma donation. The other is the silent reality that while most people are making just enough, we need in our society just a little more. This is why people take 2 jobs or 3 jobs. It's about making ends meet while still wanting just a little pocket money to make life more bearable. I feel the division and income disparity is a real thing and becoming more of a reality day to day. The gap is wider.

I've come to realize that if I had not left a job I love that didn't pay enough to this job which I also love but also pays me far better hourly, I don't know if we would have been able to bear the brunt of car repairs, a broken fridge needing replacement or otherwise. No matter who is in those seats or donation beds I think most of us are there because it helps the gap feel just a little less wider. Does the pharma industry know that? Yes, which is why they pay for donations and don't have as many donors as they would probably like so it has to be incentivized. Regardless...however you feel about this process there is a reason it exists. There's a need and as we all know as members of a capitalist society, if something is needed people will pay for it. Regardless of what IT is or why IT is...so don't judge.